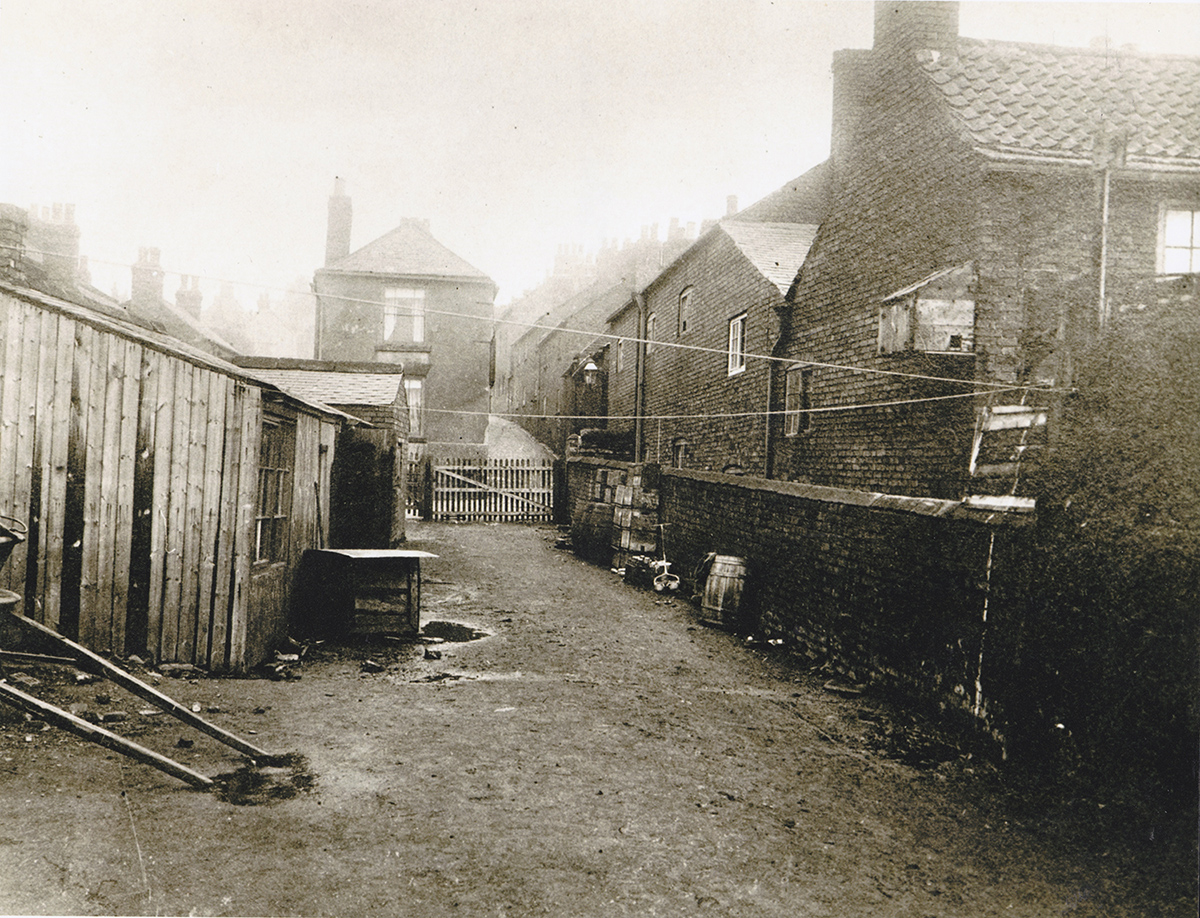 The Dog and Gun Inn was in Brown’s Yard and is the prominent building to the left of centre – this photo is taken from the Inn’s yard, looking north towards Low Pavement. 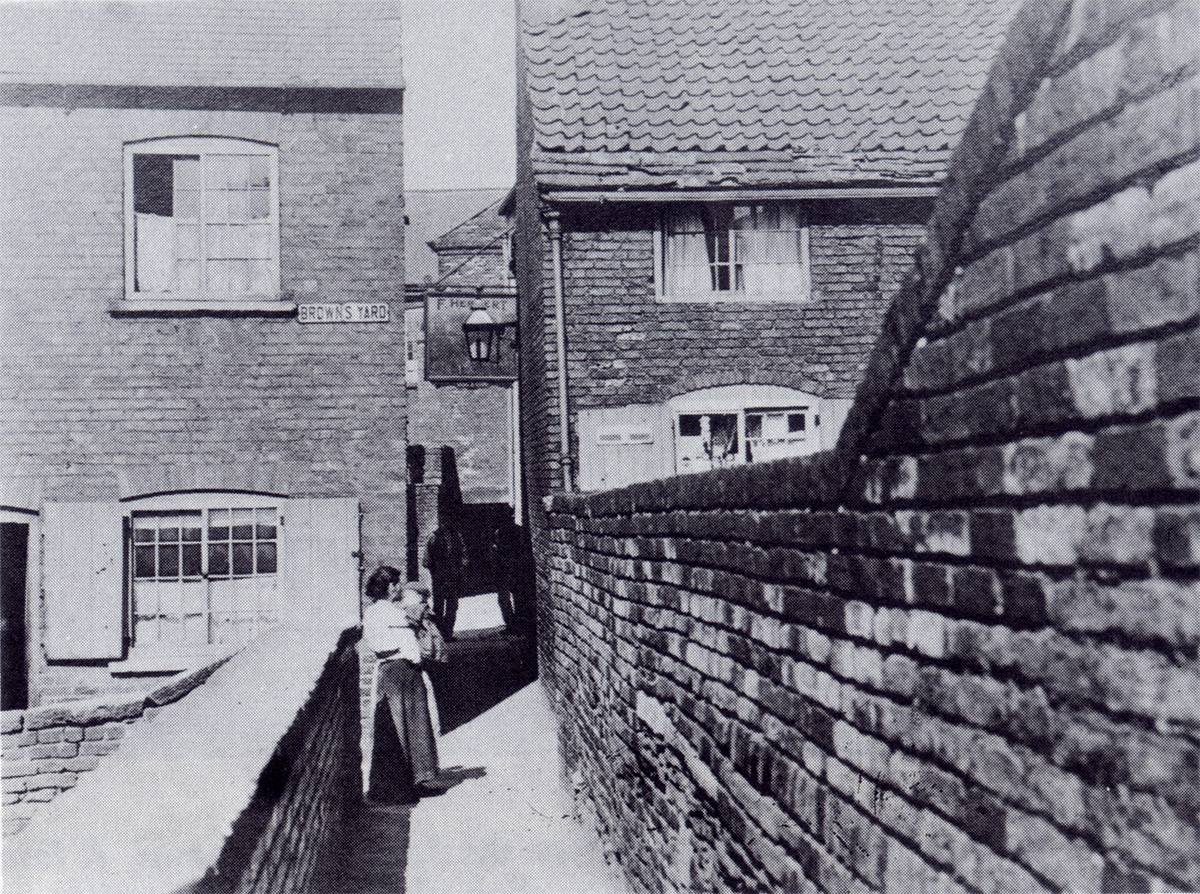 In the picture above we can see the Dog Kennels passage which led to Castle Yard from Browns Yard. The building with the sign seen at the end of the alley was the Dog and Gun Inn.

According to Hirst’s Chesterfield Pubs the Dog and Gun was “Bought by Home Brewery in September 1898 for £1,800. Licence given up with that of the Tree Tuns for new pub on Markham Road. Closed on 2nd June 1912. Now demolished, the site occupied by the lower part of the bus station.”

Lively times at the Dog and Gun

Ann Forrest, landlady of the “Dog and Gun”, Castle Yard, Chesterfield, was summoned for keeping open her licensed premises open during prohibited hours on the 14th inst.
– Mr Middleton prosecuted, and Mr A. Slack defended, and pleaded not guilty.
– Mr Middleton said the defendant was the license holder of the “Dog and Gun” down Castle Yard. It was always very difficult to keep this place under proper police supervision on account of its isolation from civilisation.

On the night in question there were a lot of men who had been turned out from the “Castle Vaults” and other houses and had congregated there, remaining until 3 o’clock in the morning. What these men did formed the subject for inquiry by the Bench on Monday, when a man named Conroy was committed to prison for assault. They made such a disturbance that the residents were unable to sleep.

Close to the public house was a piece of waste land, which had been an old garden, and which belonged to the licensed premises, and it was on this ground that the men assembled. About 12.30 Conroy was seen to go round with his hat collecting from the others. When he had collected a certain amount of money he gave it to another man who took the money into the “Dog and Gun” having to pass Mrs Forrest on the way in. He came out shortly afterwards with a stone gallon bottle of beer, which was shared amongst the men. When they had finished they sent a woman, named Mary Ann Foy, for more.

Sergeant Evans went down the yard at 2 o’clock, and as result was badly assaulted.
– Harry Bargh, Brown’s Yard, Castle Yard said on Sunday morning there was a big noise, over a dozen men being there. They were singing and making a row. Witness stood watching the people for an hour and a half. When he first came out, about 12.30, Conroy was there and was going round with his hat. Some coppers were put in his hat and he gave the money to Wm Buck. The men were about three yards from the door where Mrs Forrest was standing. Buck went past Mrs Forrest through the back door, and was in the house a few minutes.

When he came out he had a stone gallon bottle, which he took to the men. All drank from one glass, which was repeatedly replenished from the bottle. The men went on to a piece of waste ground opposite the “Dog and Gun” to drink the beer. When they had finished it, Mary Ann Foy took the bottle into the house, had it re-filled, and brought it back to the men who continued drinking and making a disturbance until late. When he went to bed at ten minutes to two they were still making a row.

By Mr Slack: The row had not commenced when he came home at ten minutes past twelve. There was a congregation of young men drinking nearly every Saturday night.
– Mr Slack: Are you the gentleman that has been convicted here so often? – Witness: No; I have never been convicted here in my life.
– Mr Middleton: You ought not to ask such questions. – Jane Pearce gave evidence as to the men being there, and said that she saw from her house, through the window, a woman coming from the direction of the men. She had a bottle under her apron.

– Wm Crane said that he saw the men there. One of them, he didn’t know which gave him a drink from a bottle.
– Mr Slack for the defence, said that there must be something at the bottom of the case. He admitted that the disturbance which took place nearly every Saturday night was an unmitigated nuisance and his client was as anxious to have it stopped as were the police. He would call his witnesses and his client would swear that on the night named both she and Mary Ann Foy were in bed before 12 o’clock at night.
– Ann Forrest said that she had lived at the “Dog and Gun” between 14 and 15 years, but had never had any complaints about her house.

About five minutes to 11 on the date named Buck came into the bar and asked for a gallon of beer. He had a pint to drink while the gallon was filled for him. Witness locked the bar up about ten minutes past 11 and went to bed about 11:45 leaving Mrs Foy and Smith, the barman. Witness heard Mrs Foy come to bed shortly after she went
– before 12 o’clock – and also heard Smith locking up.

She first heard she had been guilty of supplying beer during prohibited hours on Tuesday, when the summons was served by Sergeant Evans.

– By Mr Middleton: She was not standing at her back door after closing time. – William Buck said he went into the “Dog and Gun” just before 11 o’clock. He bought a gallon of beer in a stone bottle and had a pint to drink. When he got it he put it on the waste ground behind a car, and went round the town, afterwards coming back with some mates to drink it. It was untrue that he went into the house for beer after closing time.

– By Mr Middleton: Witness was a nephew of Mrs Forrest’s. The evidence Bargh had given was entirely untrue. The only reason that he could give for Bargh giving evidence against them was because there was a lot of ill-feeling between them all and him. He had asked for the glass when he bought the beer. He intended to take the beer home and not drink it in the garden. He had plenty of glasses at home, but he did not know why he should borrow one then.
– James Smith, barman at the “Dog and Gun” gave evidence as to Buck buying the beer.
– Mary Ann Foy also gave evidence, and denied fetching beer. She denied hearing any disturbance whatever down the yard.

– The Bench considered the charge proved and fined defendant £ 5 and costs.